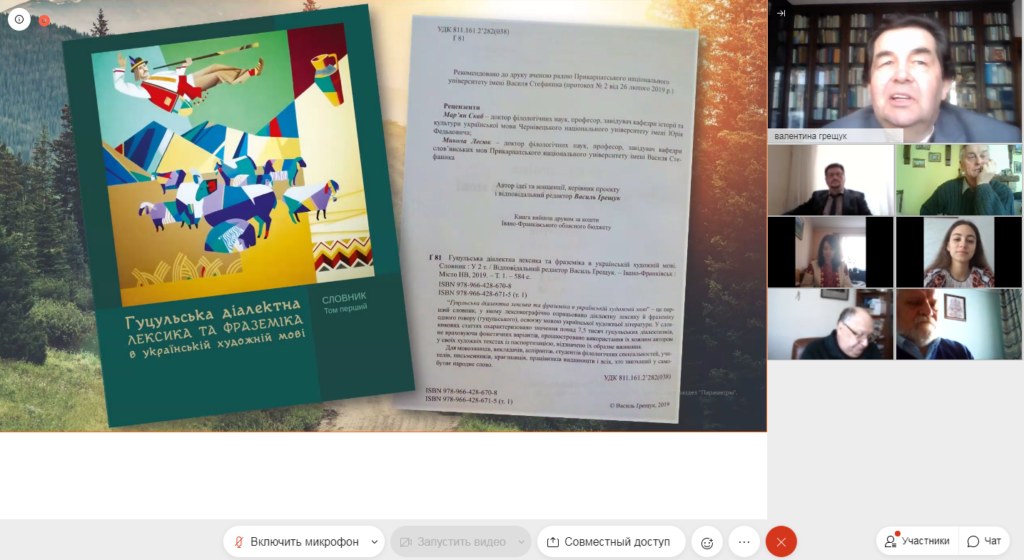 Today, February 19, there was an online presentation of the second volume of the unique dictionary “Hutsul dialect vocabulary and phrasemics in the Ukrainian artistic language“, organized by the Department of Ukrainian Language, Faculty of Philology and The Educational and scientific Institute of Ukrainian Studies of Vasyl Stefanyk Precarpathian National University. The author of the idea and concept, editor-in-chief, project manager is Vasyl Greshchuk, Doctor of Philology, Professor, Head of the Ukrainian Language Department.

The rector of the university, doctor of political sciences, professor Igor Tsependa addressed a welcoming speech to all participants of the action. It is symbolic that he joined the presentation from the Carpathians – the center of the Hutsul dialect, which is lexicographically recorded and processed in the Dictionary. Igor Tsependa noted that the Dictionary “Hutsul dialect vocabulary and phrasemics in the Ukrainian artistic language” is the result of many years of work, and its importance is manifested primarily in the importance of the Dictionary for the further development of linguistics, including lexicography, dialectology, artistic language.

Thanks to the online format of the event, prominent linguists from all over Ukraine were able to join the discussion of the second volume. Pavlo Hrytsenko, Director of the Institute of the Ukrainian Language of the National Academy of Sciences of Ukraine, emphasized the innovative nature of the Dictionary and pointed out that it is not only a Ukrainian but also an all-Slavic heritage. The importance and value of such work was noted by the reviewer of the Dictionary, Doctor of Philology, Professor of Chernivtsi National University named after Yuri Fedkovych Marian Skab. The uniqueness of the Dictionary was emphasized by Doctor of Philology, Professor of Donetsk National University named after Vasyl Stus, Corresponding Member of the National Academy of Sciences of Ukraine Anatoliy Zagnitko. Doctor of Philology, Professor of Uzhhorod National University Natalia Venzhynovych responded with great admiration for the Dictionary, focusing on the fact that a thorough report on the Dictionary was prepared for the International Scientific Conference “Phraseology in the context of related sciences” (October 12-14, 2020; Uzhhorod National University), which provoked interesting scientific discussions.

Other guests present at the event joined the speech. The writer Vlasta Vlasenko expressed undisguised joy over the scientific elaboration of Hutsul vocabulary, which she often uses in her works, and also demonstrated a dictionary of the vocabulary of her texts. Vasyl Zelenchuk, a native of the Hutsul region and a senior researcher at the Ivan Franko Literary Memorial Museum, graced the action with his colorful speech and congratulated all participants on the long-awaited publication of the second volume of the Dictionary, and focused on a large body of Hutsul stable phrases, proverbs and sayings developed in the Dictionary.

Maria Matiiv, a graduate of the Faculty of Philology and a teacher at the Kalush Primary School, who joined other students in working on the dictionary during dialectological practice, wished further creative success. Iryna Shikerynets, a former employee of the Educational and Scientific Institute of Ukrainian Studies, shared her impressions of working on the Dictionary. She designed the Dictionary and, together with students, collected material for dictionary articles during the internship.

Valentyna Hreshchuk, the director of our Institute, is largely involved in the work on the Dictionary. She has prepared preliminary materials for dictionary articles (letters Г, Ґ, Н, Т, У, Ю). The moderators of today’s action under the direction of Valentyna Greshchuk were Sofia Brenych and Lyubov Kudelnytska, students of the Faculty of Philology. We hope that the Dictionary presented today will be useful not only for linguists, but also for ardent supporters of the native language!